A History of Tablets

For my own personal use, I am still not a huge fan of any Tablet computer.   Several years ago I went the way of a Motorola Xoom Android tablet.  I found it to be an expensive way to read websites and check my email.   Other than that,  I wasn't able to get much work done with it so I put it in a cabinet and forgot it.

Lately, my job has required me to have more extensive knowledge of iPad's.   As much as I am not a fan of iOS, it seems to be pretty intuitive for my end users and  I am now "using" an iPad.  It's usefulness to someone in my line of work has yet to be proven to me, but I do see some ways that it can help attorneys and other professionals get small amounts of work done outside the office.

While reading the Petri Knowledge Base this morning I came across a pretty funny meme about tablets from Microsoft and Apple. 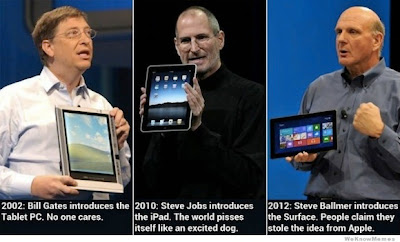 That bulking mass that Bill is holding onto, isn't really the first tablet to attempt the market.   Thanks to site that is sure to be positively boring to anyone outside the technology industry, I found the Linus 1000 from around 1987.    This awkward "tablet" weighed in at over 9 lbs, and hosted an non-upgradable 640k of system memory.
It's competitor in the portable computer market was also released in 1987 was the Compaq III portable which outweighed this tablet in weight and memory.   The Compaq III weighed over 20 lbs.
Neither the Compaq III or the Linus are the first portable computer .  That title seems to be reserved for the Osborne 1.    The Linus 1000 however seems to have played a crucial role in the development of the tablet computer.    It was a commercial flop, but was geared to be used for the health care, sales industry and by insurance adjusters.  The creation of this failed tablet led way for Jeff Hawkins to create GRiDPad or the first widely used Tablet computer.   Jeff Hawkins later went to create Palm and the Palm Pilot.  Apple saw this created the failed Newton.  Add a few more failed attempts from HP and Microsoft and now kids are playing Angry birds in English class.
﻿
Posted by Unknown at 11:17 AM